Ping Pong serving rules are the most crucial thing in the game. Everything in this world has rules. Especially sports are bound in rules. Ping pong is one of the most popular games in the USA and the UK. Rather than that, it is a standard game over the world nowadays. So the game has many rules.

Well if we look around the history of (ITTF) International Table Tennis Federation, it has changed the rules of service of the game many times.

As the best players use their best serving techniques over the opponent and they take advantage of all the time. ITTF has concern over it, and they amended the rules to deduct the best players’ effectiveness as this is a continuous process said by the ping pong players.

In ping pong, the most effective stroke is the service, and most importantly, the game starts with the service. During the playtime, when the server throws the ball into the vacuum for the service if the ball misses touching the paddle ultimately, the opponent will get the point.

Everyone talks about serving is the most complicated issue in the game of ping pong, which has been changed with the flow of time as ITTF always makes sure to run the best rules over time. So go for closer vision what are the most recent rules of the service.

You know everything about ping pong, but you do not have any equipment to play it. That would be disgusting. If you love ping pong and you are passionate about it, you should check our reviews of the best ping pong tables as we did it very carefully and honestly based on the market and the factor it should maintain.

We hope you will not be disappointed after reading this article. Instead, you will love it, and we can guarantee that. Other reviews like paddles and balls are also available on our site. You can go through it and hopefully you will be benefited. Who loves to play ping pong outdoor can also get the best outdoor ping pong tables reviews.

The Most Recent Law of Ping Pong or Table Tennis 2.6.1 tells: 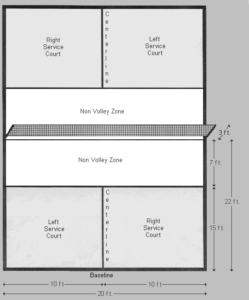 Ping pong serving rules are the essential things in the game. So you have no way to cheat on that. If you do so in front of the umpire, it will be called foul. One must keep the ball in his free hand and cannot throw the ball instantly into the air.

He must hold the ball onto his hand for a while, especially on the flat hand because he is not allowed to spin the ball while throws the ball in the air if the umpire notices that he will call foul and your service will be cancelled. 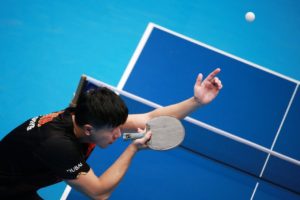 The primary thing that had been told in the 2.6.2 law is the player who is going to serve is to throw the ball upright, putting no spin on it.

And the height would be 16mm at least when the ball leaves the palm of his free hand. Then he has to maintain that it could not touch anything during fall from the height and touch the paddle.

This law is bind in with 2.6.2 rule; actually, it demonstrates the ball should not spin when it is thrown in the air.

That is the reason the bottom right procedure that we have talked about earlier is not legal. The reason for that is the ball does not raise 16mm in the air. You have to strike the ball at the right time when the ball fall from the distance it rose.

Though there are arguments over the vertical upright of the ball through the air, some players will argue regarding 45 degrees of the vertical position. They say its nearly vertical not precisely vertical. 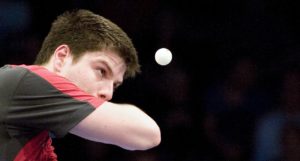 In this law, the ball should throw upward vertically without putting a spin on it and make sure it reaches at least 6.3 inches after releasing from your hand and come back lower without touching before it strikes.

When the server first hit the ball with his paddle, the ball has to land on his court first, and after passing the net successfully, it should touch opponents court as well. So for a successful service ball has to place on both the court of the players.

Another important factor you need to know in this and the previous combined law is you must let the ball fall from the peak of its height. If you hit the ball when it is rising, and the umpire can understand, he will call it a fault. It is challenging for the referee to notice that properly.

So what he does is for the first time he warns the server, and if he does it again, then he calls that foul. So in law, 2.6.3 tells this thing very clearly.

The umpire does not need to warn the player to call the fault. But he does that only because of giving a chance to the player. The referee is the all in one. So what he likes to do, he does it in the match. So the players should be aware of those issues. 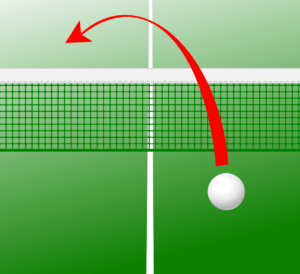 The law 2.6.3 states that during the fall of the ball from the height the server should hit it and it should make sure it touches his court first and after crossing the net set it should reach the receivers court. For the double player game, the ball should contact the right side court for both the server and the receiver.

The law demonstrates the server can serve from any corner of the net from his side. He needs to make sure the ball touches his court and the receiver’s court. It can take the curve beside the net after passing the servers court. The net is proposed to take 15.25cm out of the sideline.

There is no specific requirement to bounce the ball once. After crossing the net the ball can bounce more than once or once. The receiver should hit the ball before one bounce to continue the point. Otherwise, the server will get the point.

In this ping pong serving rule, the ball should touch the right side of each player court for both the server and the receiver. This portion is only for the double game. Whereas, all the other things that we have talked about above is for the single game.

So to be very clear about this one, the server should not cross the net during the service whereas he should serve it around from the net post. So for that one, there is no way for the argument.

Ball Location During The Service Law 2.6.4 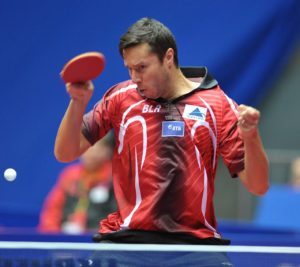 This law demonstrates the ball should be above the surface of the playing level, and the server should not hide the ball from the other players during the service.

It means from the beginning of the service until hitting the ball; the server hand cannot go under the table. The server has to keep his free hand holding the ball should be in the upright position.

Here nothing has been told about the player location both for the single and the double game keeping his paddle in hand.

For legal law, the player keeps his hand free and keep his thumb over playing surface of the table. The player can stand anywhere in front of the ping pong table.

Standing behind the end line for a player is legal in a ping pong game. But it would be illegal to cross the end line.

There is no specific law about the paddle of yours during the service where you should keep it. You can hold it even under the table as there is nothing said about it.

Quickly remove your free hand as soon as you leave the ball from your hand. Because the place gap in between net and ball is defined as the ball’s place after releasing the ball from hand.

To extend this law, you will get the legal thing about hiding the ball during the motion of service. The receiver can understand the ball location watching the servers serving action.

The most noticing point about this law is to remove your hand as soon as you leave the ball from your hand to send it to the peak of the height. But in most cases, the players do the wrong thing about this. As the umpire sits in the middle of the table, he cannot notice it a very little time.

It is quite severe for the umpire to say the service is legal or illegal from that position as we told about this earlier. So for the betterment of the game, and your personal experience, you should keep your free hand out of the area. 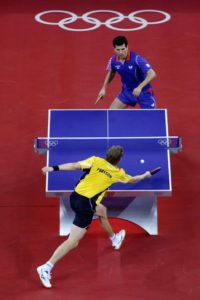 For every sport, starting is the most important thing, so for the ping pong as well. If you cannot learn the rules of any game, you cannot be a professional player in that particular game.

Ping pong or table tennis is the most popular game in the world. So entering this game will be prestigious. And entering a well-established field without knowing the rules would be hilarious for you and the profession as well.

After knowing the basics about ping pong, it would be exciting and beneficial for your personal life. How is that? Well, we have talked about that in our other article that is the health benefits of playing ping pong, and it will help you to know the best benefits of your health from a game.

Other than that, ping pong can allow you to spend quality time with your family and friends. So all those great things you are are going to get from a single place. But first of all, you need to know the basic rules of it.